Find answers to some of our more frequently asked questions by clicking on the options below.  Still Can’t find what you’re looking for? Contact us here, and we’ll get back to you as soon as possible.

How do I donate one or more cell phones, smartphones, mp3 players, or tablets?

Cell phones and all other devices can be sent to the address listed below or can be dropped off at any of the thousands of Cell Phones for Soldiers’ official drop-off locations throughout the United States.

What do I do if I have a problem shipping donating phones?

What if I want to hold an event or fundraiser?

Allow us to thank you in advance! Please complete the information requested here. You will receive an electronic welcome kit via email once you’re registered.

How do I make a monetary donation?

Online monetary donations can be made via PayPal here. You may also send a check or money order to:

Can I request a calling card for a specific military member or unit?

Yes, by providing a valid APO/FPO address or email address, Cell Phones for Soldiers can directly mail or email cards to troops. Calling cards can be requested here.

How do veterans request assistance through the Helping Heroes Home program?

To request assistance from Helping Heroes Home, please speak to your Veterans Service Officer and have them contact Cell Phones For Soldiers for more information. [email protected]

Do you send the donated cell phones directly to troops?

No. It is a common misunderstanding that Cell Phones For Soldiers sends donated mobile devices directly to deployed troops. Doing so is not a viable option because, first and foremost, cell phones can be security hazards for military members in combat zones. Secondly, the cost of international phone calls using a cell phone is very high, making this option extremely cost prohibitive. Instead, we use the proceeds from the donated phones to send prepaid international calling cards to our troops to use via their approved phones.

Is there a way I can erase my personal data before the phone is donated?

Yes. If your cell phone has a SIM card, please remove it prior to donating. You also can search the internet for “factory reset” for the specific make and model of your phone to receive instructions on wiping away all personal information.

If you cannot factory reset your device do not worry. Our recycling partner is R2:2013 (Responsible Recycling) and NAID AAA certified (National Association for Information Destruction) and follows the Department of Defense standards for wiping hard drives and devices.

What do you do with the donated cell phones?

Mobile devices and tablets donated to Cell Phones For Soldiers are sold either to an electronic refurbisher or a recycler. Once we receive a donated device, it is quickly wiped of all personal information and checked to see if it is repairable. A cell phone that is repairable is sold to an electronics refurbisher who will repair the device and resell it in the aftermarket. However, devices that are either too old or completely broken are sold to recyclers who strip the devices of any salvageable components and/or rare metals and then responsibly recycle the remaining parts. The proceeds from this process are used to purchase prepaid international calling cards for troops and to provide emergency funding to veterans.

Do you accept electronic devices other than cell phones?

Yes, we also recycle and reuse tablets and MP3 players. Please pay special attention to wrapping tablets to ensure their safety during shipping. If you have any questions concerning donations of other electronic items please contact Cell Phones for Soldiers directly.

What types of cell phones and mobile devices do you want?

We accept donations of any and all types of cell phones, smartphones and tablets from any carrier. Newer, gently-used mobile devices, including smartphones, are preferred; however, proceeds are generated from the recycling of broken and outdated mobile phones. Chargers and accessories are welcome but are not necessary to donate. If you have a charger you would like to donate, please keep the original phone and charger together. Please do not send instruction manuals.

When donating an iPhone 4 or newer model remember to turn off the Find My iPhone feature. Here are simple tips to help: https://support.apple.com/kb/PH2702?locale=en_US

Thank you for taking the extra step to cover shipping costs for your donated devices! Not only is your device donation tax-deductible, so are the shipping costs. 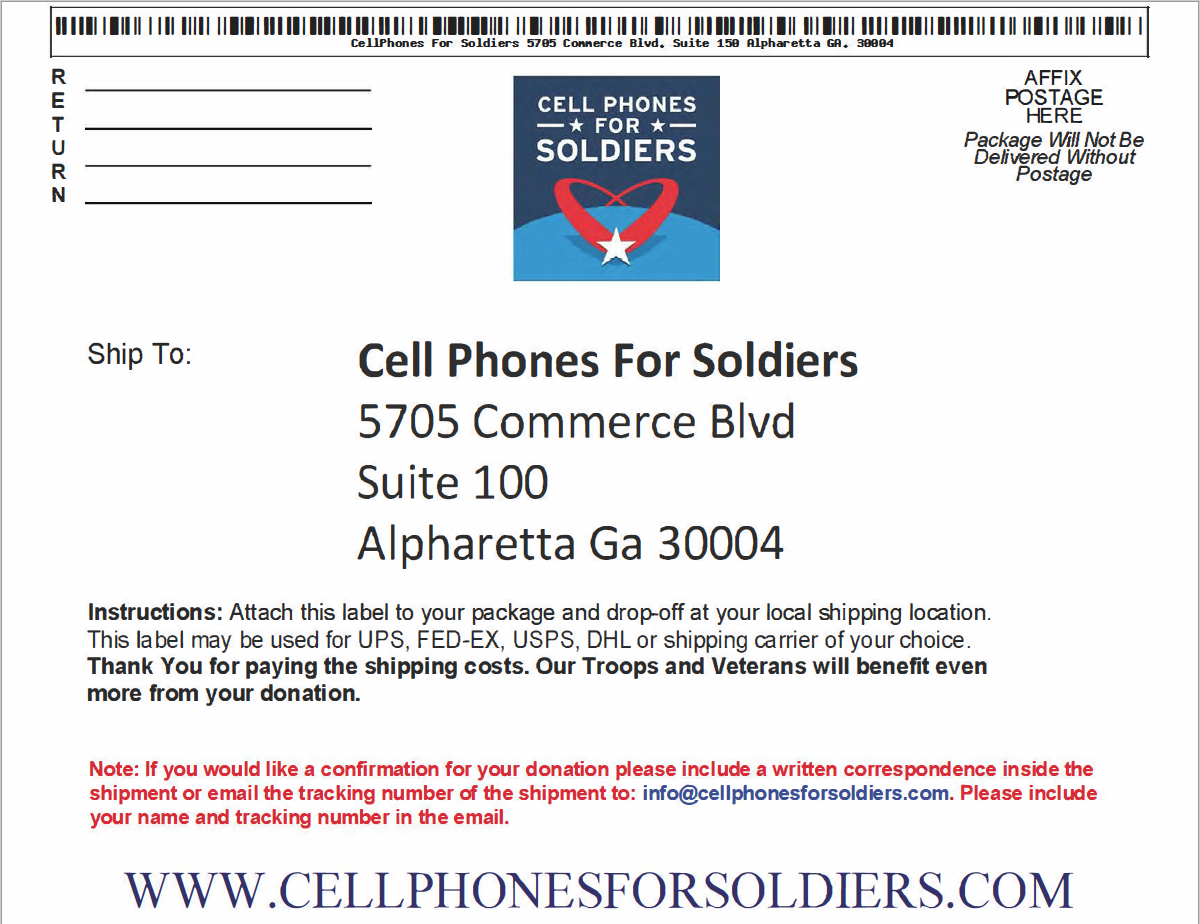 1. Count the number of donated phones for your records.

2. Place the phones flat across the bottom of the box and layer them with newspaper or bubblewrap to avoid damage.

3. Keep batteries attached to phones. If there is no battery, place tape over terminal ends.

4. Due to federal shipping regulations, you must print a battery warning label for each package. Click here to print. Affix one label to the outside of each box.

5. You must affix (USPS) or a prepay waybill (UPS, FedEx, DHL) in order for your package to reach us.

5. You will not receive an e-mail confirmation when your package arrives. Click here to print a donation receipt.